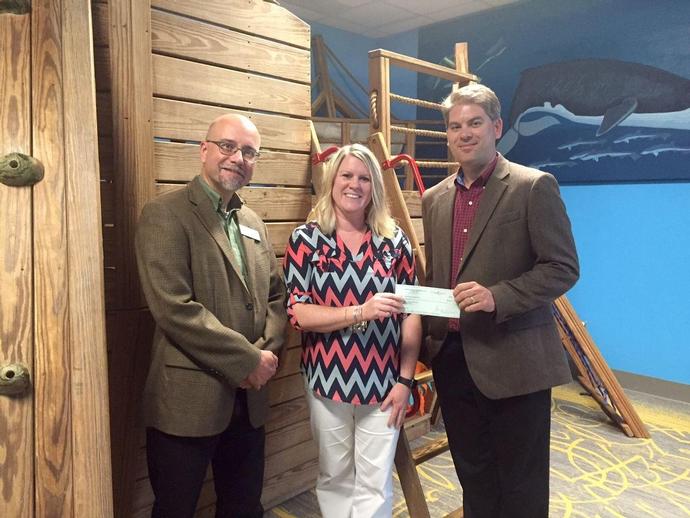 SCIENCE COMMUNICATES! "Science isn't finished until you share it

SCIENCE COMMUNICATES! "Science isn't finished until you share it." IMPACT: Share your favorite scientific fact today. Let us know what you find the most fascinating about science. EDUCATION: Join The People's Science's "The Field": scientists share their work and the public engages with new research. http://www.thefieldproject.com/ #SCICOMM #SHAREYOUSCIENCE

SCIENCE CREATES! "Science is for everyone" IMPACT: Participate in a large scale citizen science project, such as the Global Big Day, a worldwide bird monitoring day, or a BIO BLITZ. EDUCATION: Complete and share Amplifer Foundation's art-based scientific literacy/nature of science lesson. #STEAM #SIY (Science It Yourself) For more information on the Global Big Day, please follow this link, http://ebird.org/content/ebird/news/gbd20171mo/ 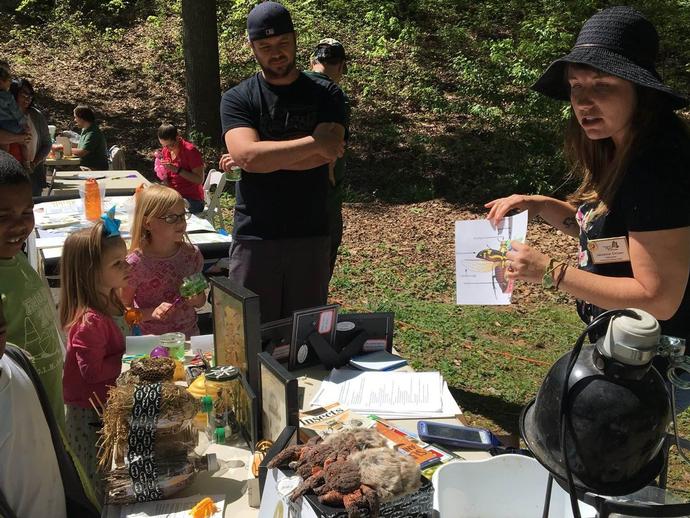 SCIENCE EMPOWERS! "Science is everywhere. Let's keep it that way." IMPACT: Participate in a Citizen Science project such as your local Master Naturalist program. EDUCATION: Learn an easy science - based strategy or skill that can serve someone's life or make a difference in yours (e.g. CPR, plant identification, an animal husbandry skill) #EVERYDAYSCIENCE If you would like more information on the Master Naturalist program, please contact Eric Tichay at either (276) 252-4847 or erictichay@yahoo.com 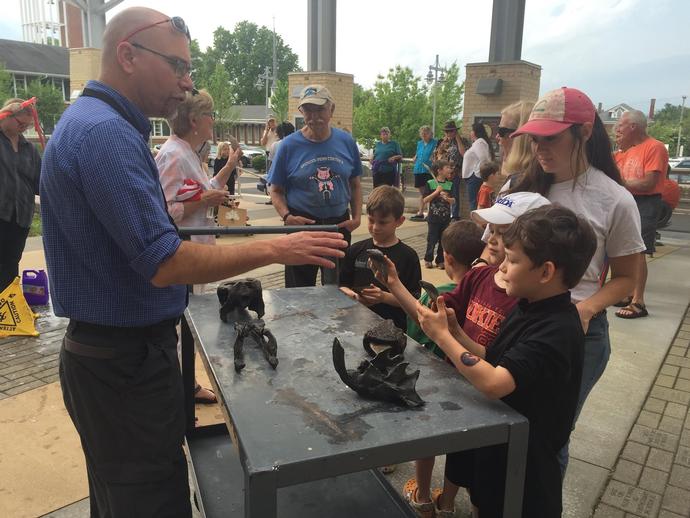 While rain caused the April 22nd Earth Day Festival to be moved indoors ...

While rain caused the April 22nd Earth Day Festival to be moved indoors, it didn't damper the festivities! The event offered a day full of games, crafts and activities for children and adults, ranging from environment friendly balloon animals to a virtual reality experience to live music and much more. The museum also served as a satellite host of the worldwide March for Science initiative to bring attention to the importance of science to the human race. Over 60 people participated in the Martinsville-based march, with over 40,000 participating in the headline march in Washington, D.C. The museum's Dr. Alex Hastings, assistant curator of paleontology, and Katie Hastings, museum educator, participated in the Washington, ...

The week of April 23rd through April 29th is the Week of Action!

The week of April 23rd through April 29th is the Week of Action! During this week, the museum encourages everyone to participate in our daily science themed actions. Each day will have two sections, Impact and Education. Today is titled "Science Discovers." IMPACT: Contact a local low SES school and offer to donate science supplies. EDUCATION: Science Game night: learn about science with friends or family via evidence - and STEM* based games. It only takes one person to make a difference! #EVERYKIDSASCIENTIST *STEM - Science, Technology, Engineering, and Math 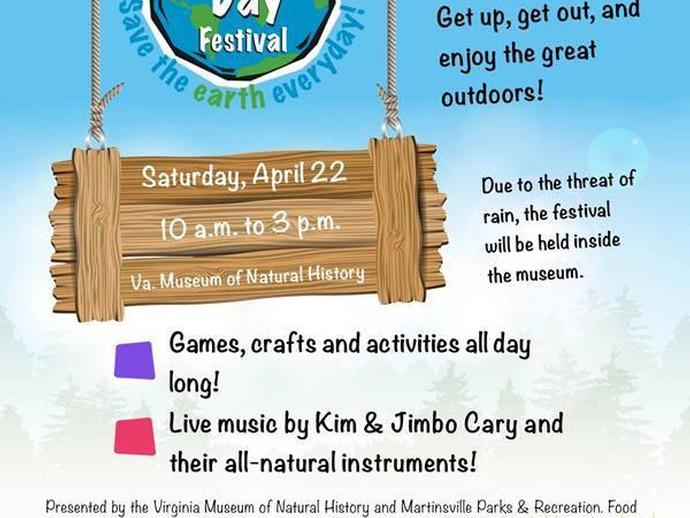 Rain won't stop the fun! The Earth Day Festival will be held inside the museum from 10 a

Rain won't stop the fun! The Earth Day Festival will be held inside the museum from 10 a.m. to 3 p.m. and the March for Science march is still scheduled for 2 p.m. tomorrow! FREE MUSEUM ADMISSION for everyone tomorrow! 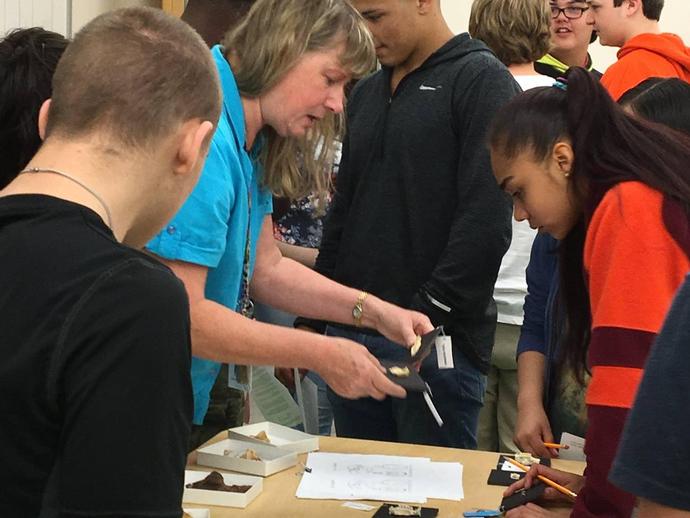 Dr. Nancy Moncrief (VMNH Curator of Mammals) and Dr. Elizabeth Moore (VMNH Curator of Archaeology) presented a hands-on program at VMNH to a group of about 40 high-school students from nearby Franklin County. Using the same methods as VMNH curators, the students identified replicas of mammal bones and teeth. In this activity, the students learned about climate change, animal extinction, and the introduction of non-native species. 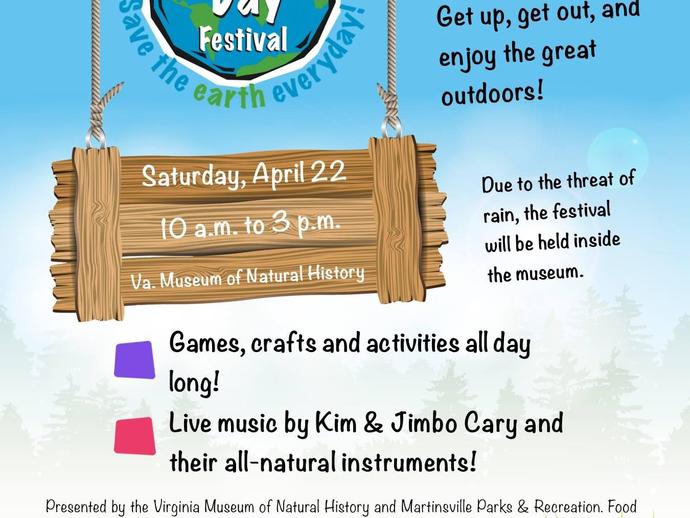 We're excited to host the annual Earth Day Festival this Saturday! Because of the threat of rain, games, crafts and other activities will take place inside the museum. The March for Science march at 2 p.m. will still be held! We hope to see everyone at the museum this Saturday for a wonderful day celebrating our planet and science!

The worldwide March for Science campaign is taking place this Saturday to bring awareness of the ...

The worldwide March for Science campaign is taking place this Saturday to bring awareness of the importance of science and science education in our daily lives. Several museum employees recently took the time to tell us why science is important to them. Marches are taking place throughout the world this Saturday, in communities big and small, to show support for science. The museum is proud to be hosting a satellite march in Martinsville to show our community's support! We encourage everyone to participate in the Martinsville march or one close to where you live. To find a march closest to your home, visit www.marchforscience.com/rsvp. The Martinsville march will begin at the museum at 2 p.m. and last approximately 10 ...

THE MUSEUM WILL CLOSE TO THE PUBLIC AT 3 P

THE MUSEUM WILL CLOSE TO THE PUBLIC AT 3 P.M. ON SATURDAY, APRIL 29 TO ALLOW SETUP FOR THE "GRAPES & GRAINS" FUNDRAISING EVENT. Proceeds benefit vital Research, Education and Exhibits programs; thank you for your support! A limited number of tickets and table sponsorships are still available for Grapes & Grains on April 29, with proceeds benefiting vital museum programs in research, education and exhibits. Thank you to our participating wineries, meaderies and breweries: Franklin County Distilleries, Blacksnake Meadery, Hamlet Vineyards, Preston Ridge Wnery. Brooks Mill Winery, Danville Distributing Company is the official beer provider. To learn more or to purchase tickets online, please visit the link below. Thank you for ... 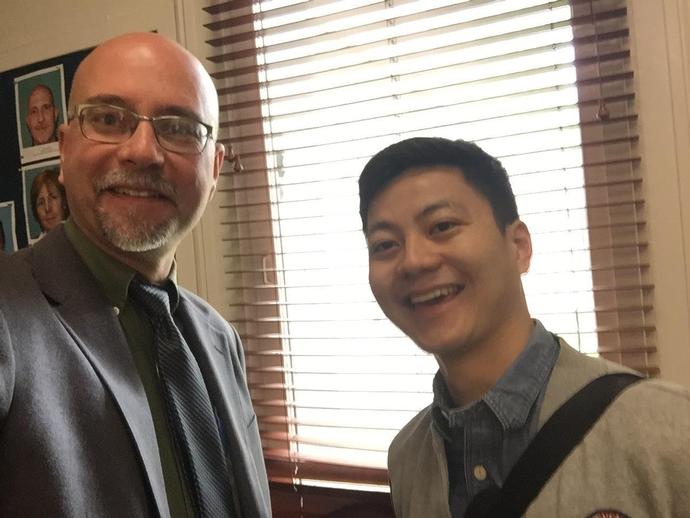 While visiting the Smithsonian National Museum of Natural History, Dr

While visiting the Smithsonian National Museum of Natural History, Dr. Keiper ran into Carlisle School 2010 graduate Zhang Jing! He is now working for the biodiversity consortium IUCN in Arlington. 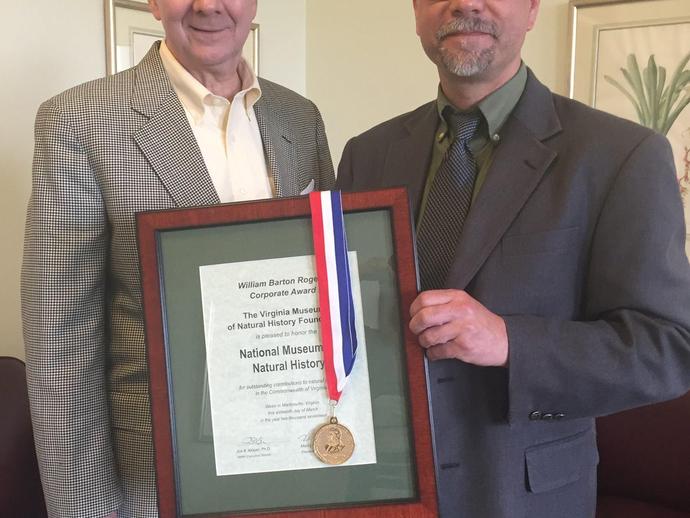 Earlier this week, Dr. Joe Keiper (right), executive director of the Virginia Museum of Natural History, was in Washington, D.C. to present The William Barton Rogers Corporate Award to the Smithsonian's National Museum of Natural History. The award was one of 5 awards presented as part of this year's Thomas Jefferson Awards. Accepting the award on the behalf of NMNH was Randall Kremer, director of public affairs. 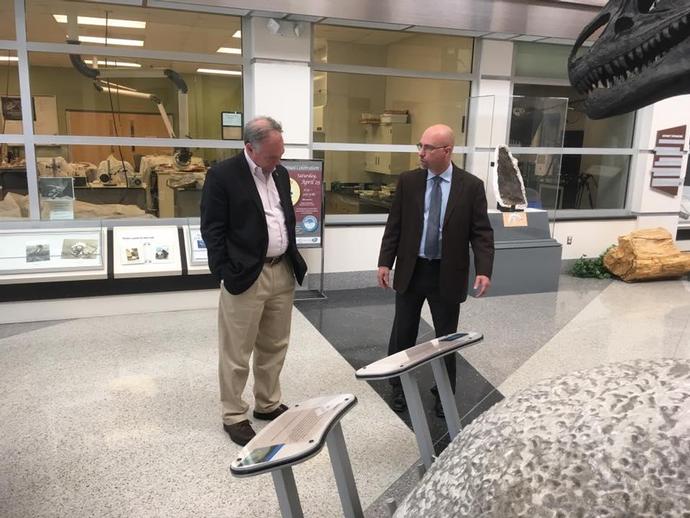 U.S. Senator Tim Kaine recently visited the Virginia Museum of Natural History, where he learned about the museum's many programs in scientific research, education and exhibits.

Dr. Nick Fraser, former director of research and collections (as well as curator of paleontology) at VMNH, is doing some amazing things as head of the Department of Natural Sciences for the National Museums of Scotland. 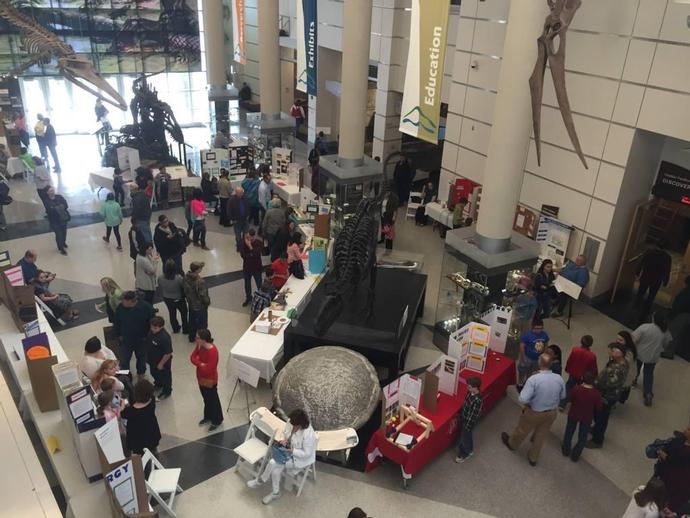 The Virginia Museum of Natural History was proud to serve as host of the Southwestern Piedmont ...

The Virginia Museum of Natural History was proud to serve as host of the Southwestern Piedmont STEM Education Collaborative's (SPSEC) 2017 STEM Showcase, an annual event that provides an opportunity for regional students in 3rd through 5th grades to showcase their STEM-related projects to the public. Each participating student was chosen by his or her school or school division within the Southwestern Piedmont region, which includes schools located in Franklin County, Henry County, Martinsville City, Patrick County, Pittsylvania County, as well as Henry County Home Educators. The museum would like to thank all of the students, parents, teachers and school administrators for their dedication in making this event so ... 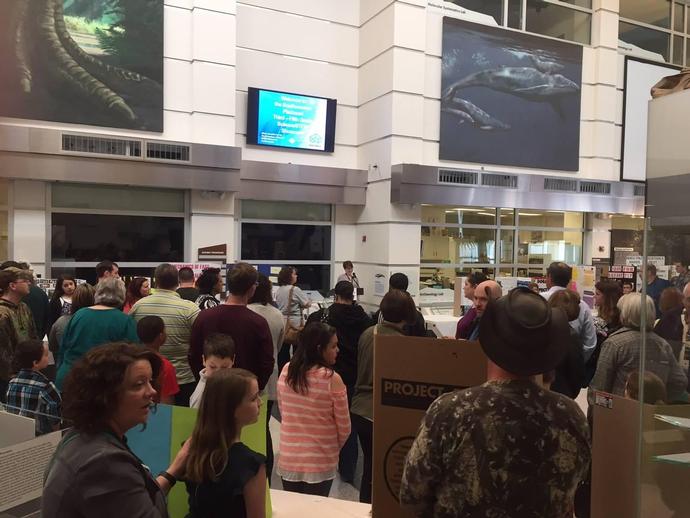 We were honored to host the 2nd annual STEM Showcase today at the museum!

We were honored to host the 2nd annual STEM Showcase today at the museum! The students' projects were exceptional, matched only by the support of the parents, teachers and school administrators. A complete album of pictures will be uploaded in the coming days! 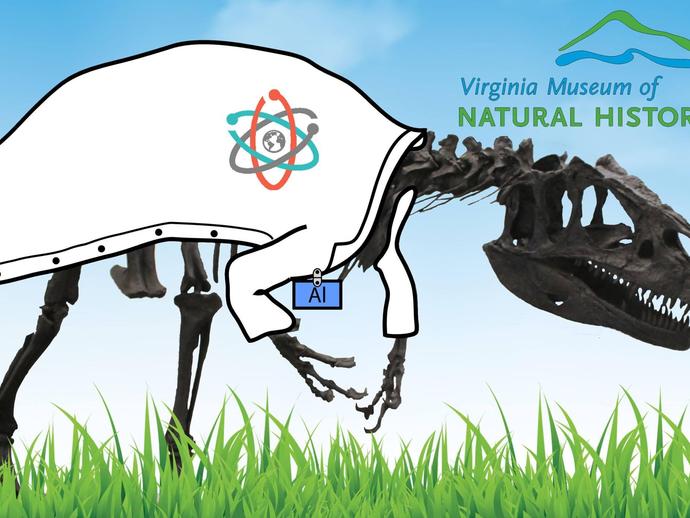 Big Al is getting ready to March for Science during our Earth Day Festival event!

Big Al is getting ready to March for Science during our Earth Day Festival event! What do you think of his new look? 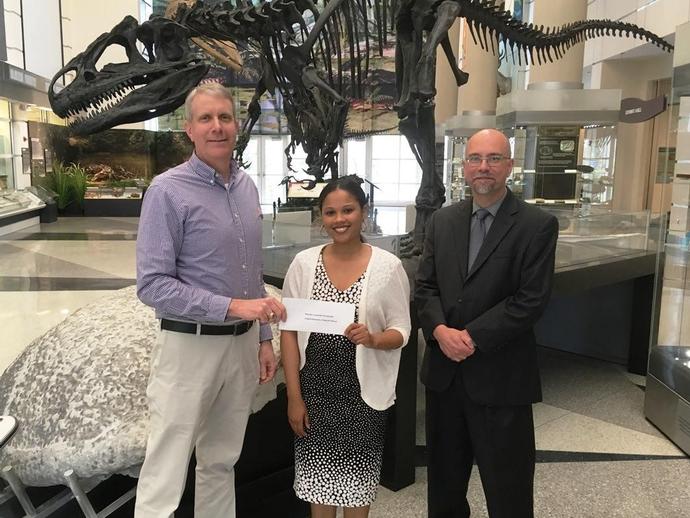 Bassett Furniture recently presented the Virginia Museum of Natural History with a $5 ...

Bassett Furniture recently presented the Virginia Museum of Natural History with a $5,000 donation in support of upcoming museum events and programs. This generous Corporate Partnership will support the Grapes & Grains fundraising gala as well as family festivals during the coming year. Pictured (l-r) are Eddie White, VP-Human Resources for Bassett Furniture, Jennifer Bowles, VMNH Foundation Board, and Dr. Joe Keiper, VMNH Executive Director. To learn about Corporate Partnerships and other ways to partner with VMNH, please visit http://www.vmnh.net/donate-now. 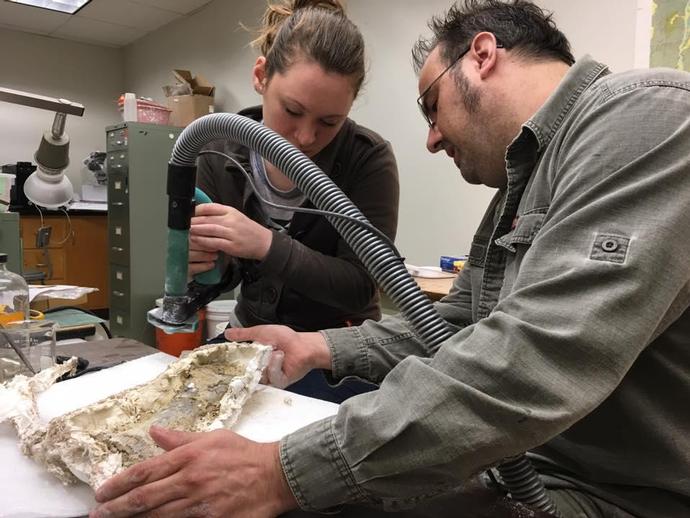 VMNH paleontologists Alex Hastings and Ray Vodden made the trip back to Lynchburg College today ...

VMNH paleontologists Alex Hastings and Ray Vodden made the trip back to Lynchburg College today to help out Jennifer Yates with her student project on a dinosaur toe bone from Wyoming. It's coming along great!

Southern Virginia boasts a plethora of exceptional elementary school students, and the museum is proud to host the 2nd annual STEM Showcase, which provides the opportunity for some of these students to showcase their STEM-related projects to the public! Come out to the museum this Saturday to support your local students! Museum admission is FREE during the event from 10 a.m. to noon. Thank you to our sponsors: First Piedmont Corporation and Arconic.

Registration is now open for VMNH Summer Camps! Each camp is Mon

Registration is now open for VMNH Summer Camps! Each camp is Mon.-Fri. from 9 a.m. to 4 p.m., with camps for ages 6-8, 9-11, and 12-14. Camp topics include science, nature, math, social studies, health and engineering, with a variety of fun, hands-on activities. Camp rates include a morning and afternoon snack as well as all activities such as take home crafts, engineer designs, group projects, and experiments. Before and after camp care is available upon request. Scholarships are available thanks to funding by the Southwestern Piedmont Master Naturalists and Kiwanis. To register, or for more information, please visit the link below or contact us at 276-634-4185 or discover@vmnh.virginia.gov. 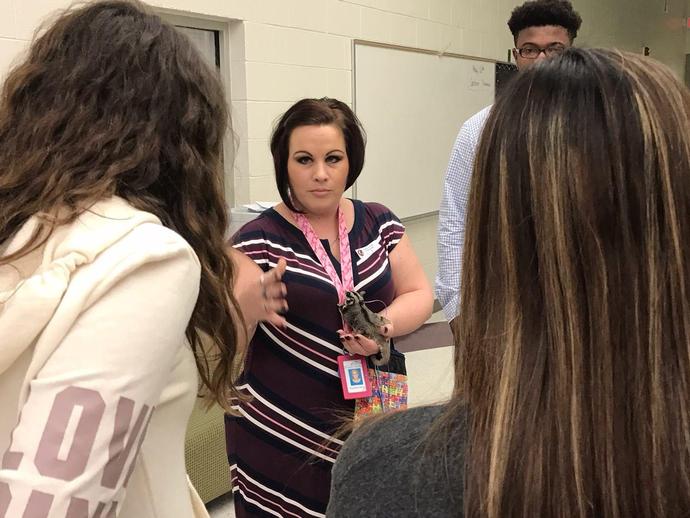 Krystal Davis, of the museum's research and collections department, spent this morning at Magna Vista High School presenting a special program on animal adaptations to the 10th grade "Warrior Tech" students. Krystal used her sugar gliders, distant relatives of the Virginia Opossum, during the program.

A limited number of tickets and table sponsorships are available for the Virginia Museum of ...

A limited number of tickets and table sponsorships are available for the Virginia Museum of Natural History's Grapes & Grains fundraiser on April 29, with proceeds benefiting vital museum programs in research, education and exhibits. This event includes a variety of wines, beers, food, and a silent auction. Don't miss the whiskey tasting with the VMNH scientists!

Big Al, the museum's iconic Allosaurus that greets visitors as they enter the Harvest Foundation Hall of Ancient Life, suffered quite a few major injuries in its short life. 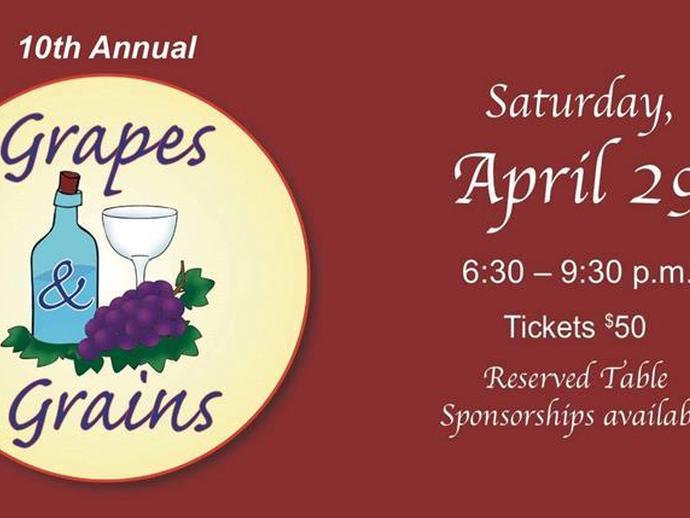 A limited number of tickets and table sponsorships are still available for Grapes & Grains on ...